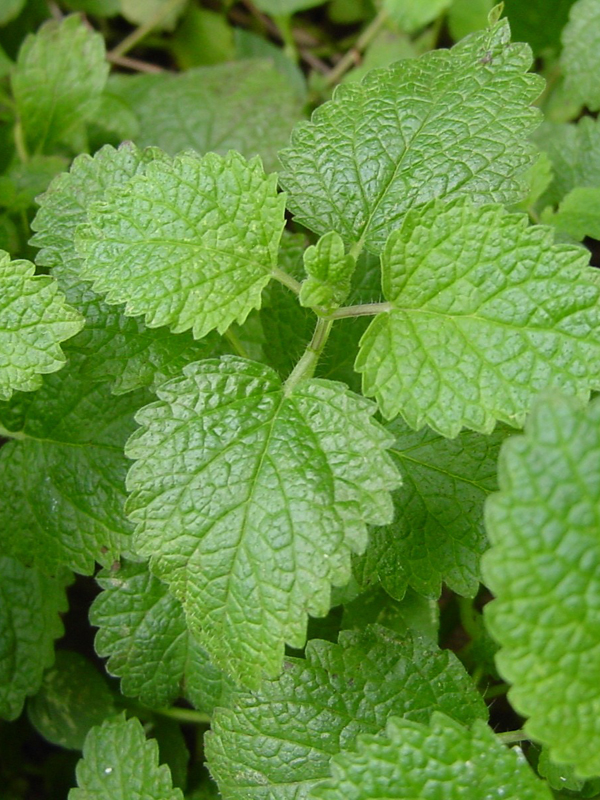 I weave light into words so that
When your mind holds them
Your eyes will relinquish their sadness,
Turn bright, a little brighter, giving to us
The way a candle does
To the dark

Right now in my garden, an explosion of lemony green is taking over the banks of the creek. It’s absolutely fine with me; lemon balm can take up as much space in my yard as it likes. I cut it fresh, inhaling the citrus-earth-pungent scent, rinse off the insects and dirt, and use it for sun tea. Most people don’t know it, but lemon balm is ancient royalty among western medicinal herbs, with an alchemical history that leads back thousands of years to the mother goddess.

Its latin name, Melissa, is a word used for the priestess of the honey-bee goddesses of ancient times. Thousands of years ago in Ephesus (Turkey today), the bee was the model for ceremonial life: the Great Goddess was the queen bee and her priestesses were called Melissai. The Greeks adopted this concept, and the Goddesses of Earth and Nature (Demeter, Persephone, and Artemis) were later served by the Melissae.

…we learn that Artemis is a bee, Melissa, and that both she and the bull belong to the moon. Hence both are connected with the idea of a periodic regeneration. We also learn that souls are bees and that Melissa draws souls down to be born.

Lemon balm was a sacred herb in the temple of Artemis/Diana, and the herb that assisted the ancient beekeepers in keeping honeybees happy and well fed with nectar. Named after the priestesses of the Goddess, Melissa officials is steeped in this sacred and mysterious transformation from nectar to honey, from new to full moon, from sunlight to sugar, and from death to rebirth.

Lemon balm’s elegance in the realms of alchemy and transformation are legendary. Beyond that, the plant’s specific application for transforming grief and sorrow is also well documented. William Shakespeare’s references to lemon balm as a comfort for grief in several of his plays reflect the common understanding of his time. Early herbalists and writers praised lemon balm for its medicinal and uplifting qualities. Eleventh century Persian physician and philosopher Avicenna was an early advocate for the use of lemon balm in treating depression and melancholy. In his book The English Physitian, fifteenth century herbalist Nicholas Culpepper quotes Serapio on lemon balm: “It causeth the Mind and Heart to becom merry, and reviveth the Heart fainting to foundlings, especially of such who are overtaken in their sleep, and driveth away al troublesome cares and thought…”.

Lemon balm is my teacher in the realm of alchemy and transformation. Sit down by a healthy, flourishing lemon balm plant and you can feel its deep and complex alchemical medicine. This medicine is the beauty and power of transformation…an every day mystical process that turns lead into gold, despair into hope, and grief into love. This kind of alchemy is what I hold tight to, in the midst of intense grief for the plight of the earth, for humanity, for myself—trying to recall the unfailing cycles of emotional transfiguration even from the darkest of places.

And though it may never completely disappear, the truth is that grief does transform. It may take years, it may take an excellent therapist, it may take loving companions, the balm of poetry, or help from some powerful plant friends. Things are going to shift.

In the body, lemon balm has been historically used as a nervine, calming the nervous system (particularly anxiety and heart palpitations) and calming the digestive system. Arabian physicians described it as a favorite remedy for headache and nervous disorders in the seventeenth century. Fresh plant extract has been recommended (Protocol Journal of Botanical Medicine, Vol 2, No 1, 1996) for sadness, mild depression, and anxiety—especially for children.

More recently, a number of clinical trials and pilot trials on lemon balm have shown the power of the herb to reduce anxiety disorders and insomnia, reduce anxiety in Alzheimer patients, and reduce stress responses.

One afternoon at Commonweal Garden in Bolinas, California, around a giant copper distiller held over a fire, we watched the lemon balm we had collected boil and the steam condense. My German herbal teacher, an expert in both essential oils and alchemy, showed us why lemon balm is precious as an essential oil—its true essential oil more expensive even than rose. The oils gather only on the underside of the leaf, making it more difficult to gather through distillation. We gathered a lot of hydrosol, but only a few jewel-like drops of essential oil from an enormous amount of plant and work.

But lemon balm doesn’t have to be distilled. It is one of the easiest and most pleasant herbs to bring into the body—in a fragrant cup of hot tea, iced tea, or warm bath. I’m not sure why lemon balm has gone generally out of favor with modern herbalists. Maybe the fact that it is so mild, tastes wonderful, has an uplifting scent, and has no negative side effects has unwittingly moved lemon balm from the “medicinal” category to the “beverage” category. I am here to say that it can be both.

Benedictine Abbess Saint Hildegard of Bingen, writing about human nutrition in the twelfth century, suggested drinking the strained tea of one part lemon balm and three parts fennel leaves, boiled in water: “Lemon balm reduces the effects of harmful humours and prevents them from gaining the upper hand.”

You can easily find out what medicine lemon balm holds for you. In my area in Sonoma County, California, lemon balm grows everywhere: along trails, in fields, in gardens, and in my yard. It grows in many areas of the United States and Europe. Fresh leaves make the best hot or iced tea, by itself or with lemon verbena, mint, or fennel: just rinse a handful of leaves (even still on the stalk) and let them steep in just boiled water or in cool water for sun tea. Dried lemon balm will work as well. For a bath, make a strong tea and pour into your bath water. Inhale deeply and see what transforms.

What’s on This Site